Hand Banana, also spelled Handbanana (voiced by Dave Willis) is a yellow dog that Frylock genetically engineers for Meatwad using the "Make Your Own Dog 1.0" software, Carl's pool, and Master Shake's hand DNA. Meatwad names the dog "Hand Banana.” Hand Banana can speak so that his words are heard only by Carl, who is immediately unnerved by Hand Banana's clearly-menacing but initially-mysterious threat, "Tonight. You." Since Hand Banana's speech cannot be heard by Frylock, Master Shake, or Meatwad, to them, Hand Banana is an innocent and loving dog. Unknown to them, however, Hand Banana has some sort of sexual craving for Carl and continuously rapes him throughout the episode. Carl appears either hallucinatory or simply deranged for the majority of the episode. Hand Banana carries out his threats and brutally rapes Carl whenever they are alone.

Finally tired of Hand Banana's sexual abuse, Carl creates his own genetically engineered dog. He names it "The Enforcer,” though it prefers the name "Spaghetti.” He orders Spaghetti to rape Hand Banana, but Spaghetti does not find himself attracted to Hand Banana, and instead brutally gang rapes Carl along with Hand Banana; which both Frylock and Shake witness through the window. The two see that Carl was telling the truth about everything before reading the carton. It turns out before in the episode that the software "Make Your own Dog 1.0" is illegal in most nations and has adverse side-effects, such as the dog forming a mental link with members of the owner's family (in this case, it is Carl, which is why only he can hear Hand Banana's threats).

Hand Banana appeared in the final episode, "The Greatest Story Ever Told", where he raped Oglethorpe and where he was killed by the police.

The creation of Hand Banana

Hand Banana on the phone

Hand Banana pretending to be sad 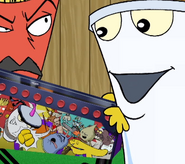 Hand Banana on the side of a pinball machine in Eggball

Hand Banana in a Scooby-Doo style in One Hundred

Retrieved from "https://aqua-teen-hunger-force.fandom.com/wiki/Hand_Banana?oldid=32084"
Community content is available under CC-BY-SA unless otherwise noted.