MC Pee Pants, a.k.a Sir Loin, a.k.a. Little Brittle and the C-Bag is a demonspawn rap artist from Hell, who is reincarnated in different forms whenever he is killed. With each return, he establishes a new name and identity, but his voice, personality, clothing and yellow eyes remain constant.

His forms have included a giant spider, a cow, an elderly human, a vampire, a worm and a fly. In each incarnation, he wears a diaper, a shower cap and a gold chain around his neck. He usually has an elaborate scheme to take over the world, which begins by sending instructions to his listeners (who, thus far, is pretty much only Meatwad), in the form of a hit rap single such as "I Want Candy", "Doin' it 4 Da Shorteez", and "Come Visit Me Dawg". His schemes usually involve a song asking the listener to go to an abandoned warehouse at "612 Wharf Avenue" (a real address in Red Bank, New Jersey), and are invariably ridiculous and unnecessarily complicated. For example, as MC Pee Pants, he plotted to bore a hole into Hell with a blood-sugar powered drill for purposes of unleashing demons who would then operate for him a diet pill pyramid scheme. Whenever in Hell, he retains his most recent form, only to change forms when Satan reincarnates him. He is featured as one of the boss battles in the video game.

He has also appeared in a cold opening.

This is a list of what forms he was in when he returned from the dead, and what he did:

His second reincarnation, this time as a cow.

MC Pee Pants as a worm 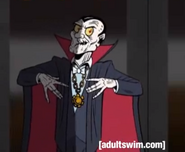 MC Pee Pants as a vampire about to go into the sun.

Retrieved from "https://aqua-teen-hunger-force.fandom.com/wiki/MC_Pee_Pants?oldid=37118"
Community content is available under CC-BY-SA unless otherwise noted.