ATHF Wiki
Register
Don't have an account?
Sign In
Advertisement
in: Characters, Main Characters, The Aqua Teens,
and 5 more

View source
watch 01:40
The Sandman Will Keep You Awake - The Loop
Do you like this video?
Play Sound

Meatwad is one of the main characters of Aqua Teen Hunger Force.

His low intelligence, naivety, trusting nature, and sexual frustration often cause him to be abused and manipulated by others, most notably Master Shake and the Mooninites.

Meatwad is inarguably the most childish and dumbest member of the Aqua Teens. He is a gullible and extremely unintelligent character whose child-like innocence is often the target of numerous forms of ridicule and bullying by Master Shake and even The Mooninites. Though Frylock tries to protect him from their abuse and corruption, Meatwad is often too oblivious to realize that he is, in reality, being used by them for their various schemes; in fact, there have been times in the series where he would often side against Frylock in an effort to fit in with his supposed friends. However, there have been times at which he has outwitted Shake by taking advantage of Shake's greed and narcissism.

Despite his child-like persona, Meatwad does seem to possess limited knowledge of adult culture. An example of this is his knowledge of profanity, although due to his childish outlook on life, he is shown to misinterpret certain words and mistake them for another meaning.

Due to his anatomy, Meatwad has the unique and rather impressive ability to shape his body into various shapes and forms, with the most common by far being a hot dog and an igloo (as seen in the intro to every episode). Periodically he will also shift into various shapes as required by the episode plot, such as a hand displaying the middle finger (while antagonizing passing drivers at the Carl Wash), a flower (while high on pills), a "meat bridge", and what he bizarrely imagines to be the likeness of Wayne Gretzky (everybody else except Randy the Astonishing correctly identifies the shape as Abe Lincoln wielding a samurai sword).

In some instances, Meatwad has also been shown to be able to multiply into several smaller versions of himself should he be sliced in half[1]. The duplicates that he spawns seem to all possess unique personalities that are very similar to the original. The duplicates have also been shown that while they are all in theory parts of Meatwad, they are shown to be smart enough to form what appeared to be a government-style group in which they would discuss various things and make decisions on what course of action that they should take.

As his body is entirely made up of meat, Meatwad is also depicted frequently as being invulnerable to most forms of attack, though he is briefly killed when shot with a shotgun in the movie. And has been shot in "The Cloning", "Kangarilla and the Magic Tarantula", and "Working Stiffs", but he did survive, but he did kill himself with a gun in the end of "Grim Reaper Gutters".

Relationships With Other Characters

Despite being brothers, Meatwad and Frylock share a father-son relationship with each other. Despite caring for Frylock, Meatwad frequently ignores his attempts at protecting him, often siding with Master Shake when Frylock voices issue with Shake's asinine plans.

Despite being brothers, Shake is usually disrespectful to Meatwad by bullying, pulling practical jokes on him, taunting, and abusing him, but Shake doesn't really seem to hate Meatwad. Although Meatwad truly likes Shake, he has stated that he does dislike his tricks. In The Last One Forever and Ever (For Real This Time) (We Fucking Mean It), Shake apologizes for bullying Meatwad in the past and he explains that he does it to teach him a lesson. Meatwad has, however, managed to outsmart Master Shake with little to no consequences such as by forcing Shake to eat a scorpion in Party All the Time, and forcing him to swallow a sword in Bookie.

Carl generally does not care about Meatwad's well-being but hangs out with Meatwad more so than Frylock and Shake. He is also shown to be kinder to Meatwad than the rest of the Aqua Teens.

Meatwad sees the Mooninites as his "Runnin' Crew," a group of friends who care about him. In reality, however, the Mooninites do not care at all what happens to Meatwad and have been known to manipulate him into shoplifting, hypnotizing him with a certain belt, scamming him with useless "Moon Master" merchandise, etcetera. 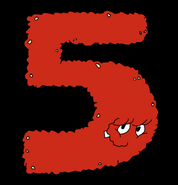 Meatwad as a five

Meatwad as a bridge in Rabbot 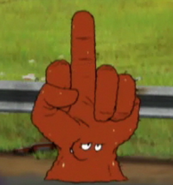 Meatwad as a middle finger in Carl Wash

Meatwad as a hotdog in the intro

Meatwad as an igloo in the intro 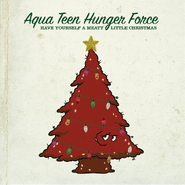 Meatwad as a Christmas tree 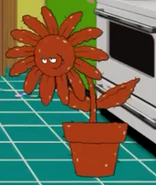 Meatwad as a potted flower

Meatwad as a brick wall