Season 11 premiered on June 21, 2015. It goes under the title of Aqua Teen Hunger Force Forever.

Season 11 is the final season of Aqua Teen Hunger Force.[1]

An episode called "Laser Cowboy" was written for this season but was never produced, as Adult Swim did not think it would work. This episode was going to be entirely live-action, and did not feature any of the characters from the show (main or otherwise). The episode was meant to be like if the main characters were watching a completely different show on Carl's Roku box, and this episode was an episode of that show.[2]

Co-creator Dave Willis first announced that season 11 will be the final season on April 25, 2015 at a C2CE convention panel.[3] He stated that the series was cancelled, and it wasn't his decision to end it. Willis also indirectly stated that plans for Death Fighter, a long discussed sequel to Aqua Teen Hunger Force Colon Movie Film for Theaters, have also been scrapped as well (although Dave has stated interest in doing a Kickstarter project to make the film happen[4]). Adult Swim soon after released a trailer stating it will be the final season. Willis later mentioned on Twitter it was cancelled simply because Adult Swim president Mike Lazzo was ready to move on from it.

Fans have rumored that the cancellation comes as a result of the unaired season five episode "Boston" being leaked onto the internet earlier in 2015. However at the C2CE panel Willis stated he first got the news of the cancellation one day after deciding to name the season Aqua Teen Hunger Force Forever. "Boston" was first leaked on January 31, 2015, however, it wasn't until April 8, 2015 that the episode first gained mass attention, and was soon after pulled by Turner (they would have pulled back in January, if they knew). Willis mentioned the season 11 title on Twitter on March 23, 2015[5]. Meaning the cancellation was already confirmed sometime before March 25, 2015, weeks before Turner was aware that the "Boston" episode was posted online.

This isn't the first time the show had been announced to end. The second season ended with an episode with the misleading title "The Last One", and Adult Swim aired false promos for its conclusion years ago.[6] During the production of "Last Last One Forever and Ever" Willis himself was convinced that the series would end with the sixth season, but it was ultimately renewed for a seventh season.[7] 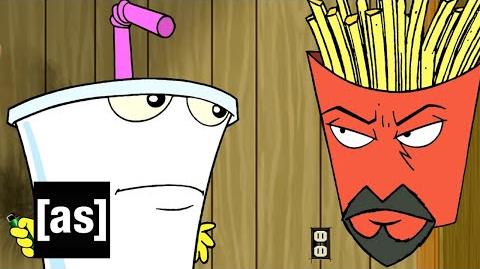