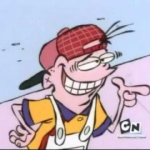 Note: My real name is not "Edd Shwartz." Just saying.

I'm a big-time fan, but there was a long period of time when I didn't watch them (they came on after midnight). I got back into the series around the time Aqua Something You Know Whatever was announced.

Likes: Comedy, Epicness, dark humor (when it's funny), and writing

How to unlock: Pick luigi in Super Mario 64 and run around in circles outside the castle for five hours. Next, play as Wario riding Yoshi in Super Mario World to unlock the Ms. Pac-Man/Galaga Class of 1981 Arcade machine easter egg, and achieve a high score of 52,828,001,721 on the Galaga portion. Next, be shot directly up from a Super Mario 64 cannon in Crash Bandicoot 2: Cortex Strikes Back, then refund your copy of Sonic Lost World to purchase a modem and router.

Directions: Apply directly to the pancreas.

Quote: "FILBERT, I WANT TO SEE YOU IN MY OFFICE IMMEDIATELY!!"

Favorite Band: Ralph Bighead and the "Never!!" on Broadway[1]

Favorite song: "The Spirit of Radio" by Rush (They can't all be jokes)

Favorite Book: Best book of all time: The Outsiders by S.E. Hinton

Favorite Super Bowl XLVIII Commercial: "The 80's Called" one with Radio Shack (and that's not saying very much)

Fifth Favorite Out-dated Meme: "THIS CASTLE IS IN UNACCEPTABLE CONDITION!!"

Second Place in the Hood, G!!

I come in third place on the "Badges" leaderboard. I am quite proud of this, despite User:Chibifoxkit put me in my place. I believe Siberian has expressed that she feels that it's not fair for Admin to compete, because they have to do so much maintenance that they are truly the only ones who could obtain the "Caffeinated" badge awarded for making 100 edits in a day. Even so, I've come to realize third place isn't so bad.

I currently have the "Wiki Leader" badge for making 250 edits on articles and over 537 articles overall. If you don't know, I'm the one who started the List of Incredibly Minor Characters page, because I found it sad to see pages like Darryl's.

On December 18, 2013, I was made an official Rollback, which is apparently a rank on this wiki. I'd like to thank Siberian99 for having trust in me. Read more about it here.

Retrieved from "https://aqua-teen-hunger-force.fandom.com/wiki/User:Edd_Shwartz?oldid=29356"
Community content is available under CC-BY-SA unless otherwise noted.