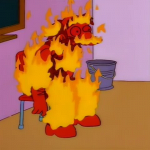 My best friend on this wiki is Brady108.

The first time I ever watched ATHF was in 2007, where I watched some of Super Birthday Snake. At the time, I was more into Code Monkeys on G4. A couple years later, in 2014, I started to watch King of the Hill and Space Ghost Coast to Coast. An year later, I watched the first 6 episodes of ATHF and some Squidbillies as well. Then in early 2016, I found Space Ghost Coast to Coast Volume One on DVD at a Goodwill store, and I fell in love with the show. Shortly after, I started to watch more [adult swim] shows, including Aqua Teens, as well as other adult cartoons, series, and anime.

Frylock: "Ride the bus to Bus Hell, you bus!" - The Hairy Bus

Master Shake: "You're both yo-yos. Shut up, ya yo-yos." - Escape From Leprechaupolis

Ted Nugent: "Anybody without a gun, a knife, a handkerchief and a chapstick get the fuck outta here." - Gee Whiz

Boxy Brown: "Don't you ever leave me with that fool again! I'll slit you up the middle!"

Boxy Brown: "OK, nothing! Muthafucka did not feed us!"

Meatwad: "I will... I will know better next time."

Meatwad: "Remove the chain, cause that's off it." - Dirtfoot

Monkey: "We're strong and our rage is fueled by ignorance!" - Banana Planet

Other favorite [as] shows:

It's Always Sunny in Philadelphia

Retrieved from "https://aqua-teen-hunger-force.fandom.com/wiki/User:RMaster007?oldid=34252"
Community content is available under CC-BY-SA unless otherwise noted.